Harris & Ross are specialists in sports injury physiotherapy and every day we see people from all backgrounds and fields who are looking for the best in recovery and rehabilitation. We were pleased to recently help local pilot- Matt Niven- after a nasty tennis accident left him with a potentially career changing injury. Read more about Matt’s story here-

It was a warm and sunny spring afternoon, the 29 April 2017 to be precise. Just a quick half hour on the tennis court, before heading out for dinner, or so I thought. I’d been on court for 2 minutes, my opponent returned an extended shot that forced me onto my backhand. I reached out to return the shot, but somehow, I found myself on the floor. The pain was intense; I didn’t quite know how it had happened, but I could see that my foot had left its usual position and was pointing in an odd direction – it wasn’t pretty.

The verdict from the doctors at A&E was a dislocated ankle and a fractured fibula (the long narrow bone that runs along the outside of the leg from the ankle to the knee). It turns out it’s a fairly common injury for an athlete, (I was especially pleased with that label) but, here’s the downside, it’s a pretty serious injury and full recovery would not be short (or guaranteed). I would need immediate surgery to pin and stabilise the ankle, followed by 12 weeks in a fixed cast, a second surgery to remove the pins, and several more months of rehabilitation.

As a professional pilot, the news was potentially disastrous for my career, so it was critical that I got the very best treatment. There could be no half measures as I would have to pass a strict aviation medical exam. Would I ever recover sufficiently to get my flying licence back? 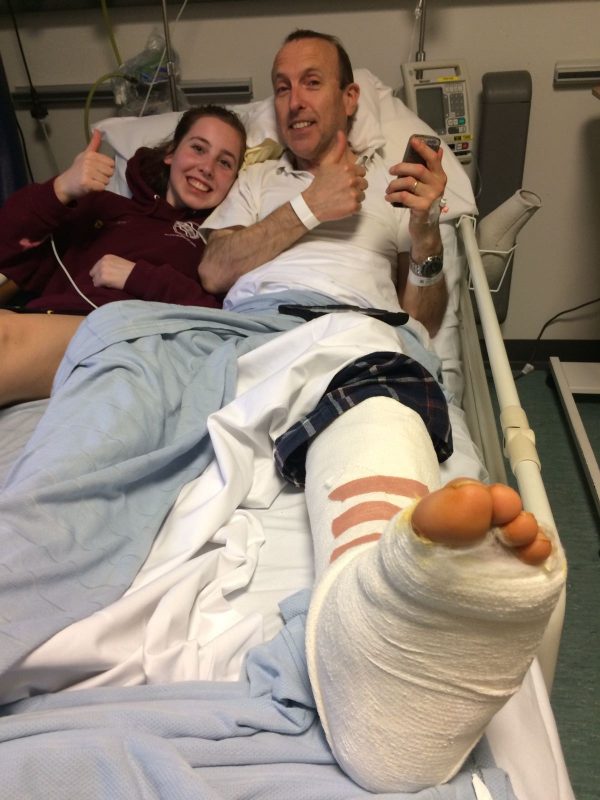 It was mid July 2017 before my leg was finally released from the fixed cast, my ankle and fibula were perfectly formed, but literally rigid! I couldn’t move my ankle more than a couple of centimetres. Intensive physiotherapy was the next stage to recovery, I knew it was critical to get the right sports injury physiotherapist and quickly. Ironically it was a performance tennis coach that said to me, “Jeff Ross, he’s the man for the job”. Having spent a bit of time researching options, I settled on that advice and Harris and Ross was my choice.

The initial consultation with Jeff Ross lasted about an hour. Jeff made sure he knew every detail of my injury and where I needed to be in terms of recovery. It was very reassuring knowing that he fully understood my circumstances and knew exactly what was required. The rest, he explained, was up to me. Around 40 minutes into the consultation he had decided on an exercise regime and treatment plan. We practised the required exercises. He prescribed a strict routine and printed notes for me to refer to. I would receive physiotherapy around twice a week, not just with Jeff but with other Harris & Ross physios, all equally knowledgeable in their field.

In early October 2017, 21 weeks after the initial injury, I had my Civil Aviation Authority Licence in my hand and I was fit enough to get back in the cockpit. Naturally, I was greatly relieved, my job intact, income secure and independence restored.

I can genuinely say that I’m a lucky guy…. I had a fantastic NHS orthopaedic specialist and a rehabilitation expert in Jeff Ross who got me walking again.

…now…where did I leave my racket?

If you need sports injury physiotherapy look no further than Harris & Ross. We have clinics in Wilmslow, Manchester, Wigan and Altrincham- for more info simply click here.