Patient Of The Month- Ian Sharman

On The High Seas With Ross Edgeley 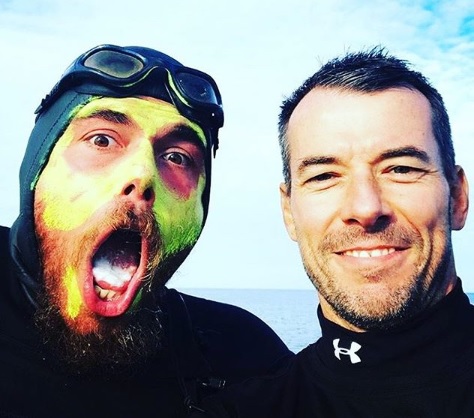 UK strongman, Ross Edgeley is attempting to become the first person to swim around the entire mainland of Great Britain- without stepping foot on land. He set off from Margate on 1st June and is currently passing Norfolk. He will complete the swim on Sunday 4th November, swimming in to Margate Beach to take the #greatbritishswim title!

On his way he has already broken a number of records, including becoming the first person to swim the entire South Coast of Great Britain, achieving the world’s longest staged sea swim (which he hit at 143 days) and speeding to the fastest time from Land’s End to John O’Groats (62 days.) He has also encountered all manner of marine life from jellyfish to seals and dolphins, and endured some fairly hair raising injuries from exposure to sea water, including the dreaded salt tongue and an open sore on the back of the neck!

Harris & Ross got involved with this amazing challenge right from the beginning. Ross attended our Wilmslow clinic prior to starting his epic marine challenge to take part in some screening tests, receive important treatment and take advise on essential prehab exercises to ensure that he was as strong as possible from the start of the swim. Our isokinetic testing device in clinic provided a great example of how the shoulder can exert more force once it had been given focused treatment by Harris & Ross physios. View our clinic in the first episode of the Red Bull series here.

However, we weren’t just viewing from the sidelines. Clinic director Jeff Ross, has been undertaking his own epic adventure attempting to reach Ross regularly to treat him. As you can imagine, swimming on average 12 hours a day in the ocean, Ross’s shoulders are under immense strain and need regular attention to keep in working order.

Jeff is well used to treating extreme athletes and action sports stars who take their bodies to the limit- but Ross’s case has the added complexity of the world record attempt meaning he cannot set foot on land. So, Jeff has been to some extreme lengths himself to ensure he gets out to Ross’s support boat- which is often found off shore in some of the remotest parts Great Britain has to offer!

From getting stuck in a herd of Highland cows in the Harris & Ross truck, to wading across a bay with a physio bed on his head, to hiking across a huge golf course trying to find access- Jeff has left no stone unturned to ensure Ross has all the support he needs to achieve his goal. Sometimes it hasn’t necessarily been the most enjoyable of treatments for Ross- as shown in ‘The Pain Is Real’ episode of his vlog here.

‘ It has been an absolute privilege to be involved in this incredible challenge. Ross will smash it because he is just so determined and focused. He deserves it too because above all he is a great guy. He shows what you can do with grit, determination, but also good cheer and a positive mental attitude.  We cannot wait to congratulate him on the finish line.’ commented Jeff Ross.

Harris & Ross are now working with Ross on his post swim preparation to ensure he manages to find his land legs after months of nothing but swimming. His first attempt at some exercises to strengthen his feet and legs led to some amusing results which can be viewed by clicking here.

Keep up to date with our latest exciting patient cases by following Harris & Ross on instagram.

You can join Ross for the final 750m of his swim- find out how to apply here. Learn more about Ross Edgeley and his #greatbritishswim challenge by clicking here.

Are you taking on an epic challenge and need the support of expert physiotherapy? Harris & Ross can offer pre event screening, create a programme for you to ensure you are in optimum shape, treat any issues and support before, throughout and after the event. Find out more about Harris & Ross High Performance by clicking here.